It happens to the best of us: you are exercising everyday, watching what you eat, and feeling stronger each day. Then you skip a day. That day turns into two, and before you know it, months have flown by with you coming up with every excuse under the sun to not do something that day. You find yourself saying things like, “I’m too tired, it’s too cold, I’m too busy, It’s raining, I’m not feeling good, if only those aliens didn’t abduct me…” You get the point. Then you utter the most harmful words you can ever think of, “I’ll start tomorrow.” I find myself in a similar rut, having used all of the above excuses. Well, except the alien abduction. I was under attack by zombies!About 4 years ago, I found myself in very unfamiliar territory. I had stepped on the scale and saw, for the first time ever, a number I had never seen, nor expected to ever see in my lifetime, 2-0-0. I was floored. How did I get here? How did I lose so much self-control? Most importantly, I found a resolve that day to never see that number again. That’s when I started running and I have spent most of the last few years in the 180-185 range (which is normal for my height btw). Fast forward to today, and as of this writing, have once again found that dreaded 200 number has re-entered my life.

It was only a few months ago that I ran my first marathon. I was at the peak of my physical fitness. Having spent all of last year with that goal in mind, I trained like i had never trained before in my life. I ran as much and as far as I could, grabbing PR’s in both my 10K and half-marathon distances along the way. I enlisted the help of a personal trainer, and for the first time in my life, found myself truly dedicated at the gym. It all culminated at the end when I completed a race distance I never dreamed that I would even attempt when I started running. After that, however, I had no other goal to chase after. I got complacent. Sure, I had a couple of races scheduled, but they were easy 10Ks or half’s. Suddenly I was also cocky. I thought, I don’t have to train too hard for those, I can do those in my sleep! Well, while I did get through those races, the last 10 miler was probably my worst ever. Sure, I blamed my sore foot for most of it, and while that was a factor, I knew I was extremely out of shape. I used to fit easily into my size medium t-shirts. Now, those shirts have become mid drifts, and I am now shopping for larges. My once loose fitting jeans, are now skin tight, creating a muffin top that Larry “The Cable Guy” would be embarrassed by.

The ultimate humility came with my run yesterday. My training runs would usually be 8-10 miles minimum. Yesterday, after the first mile, I was hurting. While I completed it at a 9 minute clip, I was toast after. My knee was also hurting, which makes sense since my knees were used to transporting a much skinnier version of me, not the chubby hubby I have become. I walked for a bit more before turning around and headed home. I was defeated. During this time I reflected on everything that has transpired over these last few months. Then something awesome happened. I found that resolve that I initially discovered the first time I was in this situation. I bent down, adjusted my laces, and started running again. I was starting over. I was no longer the marathon running machine that I was a few months ago, but that’s okay. I wasn’t wallowing in excuses, and I certainly wasn’t going to start tomorrow.  I ended up finishing 6 miles, with a couple of negative splits, and that was it. When I got home I immediately signed up for as many races as I could over the next couple of months (a 10K in June, a 5K/10K/half challenge weekend in July). I still need to find something in August, then we have the Dumbo Double Dare in Disneyland in September. Goals. Something to strive for. Such an important factor in keeping motivated.

The races themselves are not the goal. Where I am at when I get to those races are. This is what I have laid out: Lose at least 10lbs by the first 10K, back to my ideal weight by the race weekend in July, and be close to 8 minutes/mile, as well as having a bikini bod by the Dumbo races. I’m not doing this alone (that’s the other death nail). You need partners in this journey. So I am reaching out to you, the reader, to join me in this journey. That is why we started this blog. After all, we here at Joyful Miles are not superstars, well all of us except Laura anyway. We have the same struggles that you do, and we are here to help you through those struggles. I will be posting my progress through the Joyful Miles social media accounts (I promise I won’t post any bikini pics….not yet anyway), and I want you to update us on your goals and your progress. Post your workouts on any of our accounts using #joyfulmiles. As you hit your own personal goal markers, post an update using #joyfulmilestones. Just remember, when you hit those goals, it doesn’t end there. The great Ralph Waldo Emerson once said, “Life is a journey, not a destination.” When you get to your destination, where is life going to take you next? I know where I want it to take me next, back to the medium section of the men’s department. 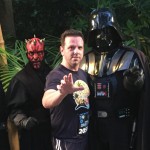 Powering Through the Miles and Finishing Strong 10 Reasons to do runDisney’s Dopey Challenge